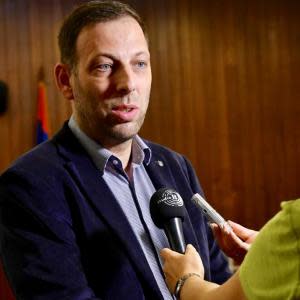 Member of Chamber of Engineers of Serbia since 2008, member of Union of Architects of Serbia since 2001, member of ASSOCIATION OF BELGRADE ARCHITECTS, Member of The Association of Applied Arts Artists and Designers of Serbia (ULUPUDS) since 2001. He is licensed urban planner at the Chamber of Engineers of Serbia, responsible designer and responsible contractor. He initiated the foundation of the Serbian Chamber of Architects, for which he received the support of the European Commission from Brussels in 2010. He is also the founder of the Sports and Recreation Commission at the Institute for Standardization of Serbia. He was actively involved in the design of public, residential, commercial and sports facilities as well as public space design projects from 2001 to the present. He is the founder and editor-in-chief of the most important regional architectural magazine “Arhitekton”. He has been a member of convocation of the Belgrade City Assembly Plans Commission since December 2013 and has been Vice President of the Urban planning council of the the Belgrade City Assembly since May 2014. In May 2018, he was elected as Deputy Chairman of the Belgrade City Assembly Plans Commission. He was a member of the jury for the Makisko polje Urban competition in Belgrade, President of the international jury for the annual award of the magazine Arhitekton in 2009, 2010 and 2011. On March 4, 2019, at the session of the Belgrade City Assembly, he was elected as the City Architect of the City of Belgrade. He is the author of a number of projects in Serbia and abroad as well as a number of Urbanistic projects. Among the most significant are: Sports Center Complex in Kosutnjak park, within which is the National Training Center (sports medicine building, multifunctional hall, Olympic swimming pool, stadium and hotel), youth sports camp Karataš, new building for Scientific Center of the Institute of Physics of Serbia, etc.

All sessions by Marko Stojcic