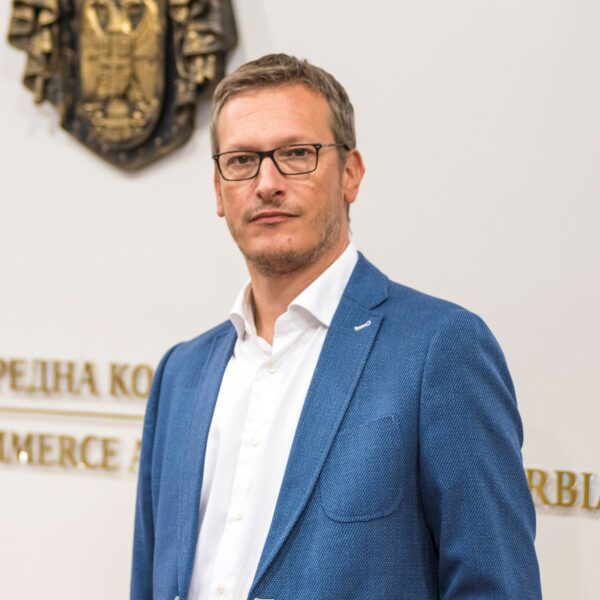 Mihailo Vesović, Director of the Division for Strategic Analyses, Services and Internationalization.

Mihailo Vesović was born on 3 May 1972, in Belgrade. He graduated from the Mechanical Engineering Faculty in Belgrade, and earned a degree of Bachelor of Science in Industrial Engineering.

He was a Secretary of the CCIS Association of Metal and Electric Power Industry, after which he was appointed to the position of Assistant Minister in the Ministry of Economy and Privatization, and in the Ministry of Trade and Services. In 2008, he was elected CCIS Vice President, for two terms of office, where his main focus was international economic relations. In his multiannual work for the Chamber of Commerce and Industry of Serbia, he was also Director of the CCIS Centre for Innovations, and CCIS Deputy General Manager, and Advisor to CCIS President in charge of issues relating to digital transformation of the economy and cooperation between the science and economy. Today, he is Director of the Division for Strategic Analyses, Services and Internationalization.

He participated in the creation of the first Cluster Development Support Programme; he organized participation of Serbian companies in a large number of international fairs; he headed numerous international trade missions; he was Deputy Co-chair of the Serbia – Russia Joint Committee; he was President of the National Oil Committee Assembly; he participated in the implementation of a large number of international projects of the EU and World Bank; and he was a Coordinator in the Best of Serbia Campaign. He is a member of the Mechanical Engineering Faculty Council.

He is married and father of two children.

All sessions by Mihailo Vesovic